Financialization and Its Discontents

What do we talk about when we talk about financialization?  Wikipedia defines financialization as a “term sometimes used in discussions of financial capitalism in which financial leverage tended to override capital (equity) and financial markets tended to dominate over the traditional industrial economy and agricultural economics.”   For a further gloss, Wikipedia adds that financialization is a “term that describes an economic system or process that attempts to reduce all value that is exchanged (whether tangible, intangible, future or present promises, etc.) into a financial instrument,” and gives as examples mortgages, insurance and government bonds.

There is little question that the American economy—and in fact the developed world’s economy—has become increasingly financialized.  New financial instruments are all around us, and in burgeoning quantities: high-yield bonds, subprime mortgages, subprime auto loans, credit default swaps, real estate investment trusts (REITs), options and other derivative instruments of all varieties.  The financial sector of our economy (banks, investment firms, etc), once the handmaiden of industry responsible for raising investment capital and providing liquidity, is now increasingly in the driver’s seat.  Financial sector revenues accounted for 4.2% of GDP in 1970 and now account for 8.2%.  We all know how this has ended: stagnating wages for the last thirty years, the inflation of a giant asset bubble, a stupendous financial crash in 2008 and sluggish economic growth since.  How did this happen and what went wrong? 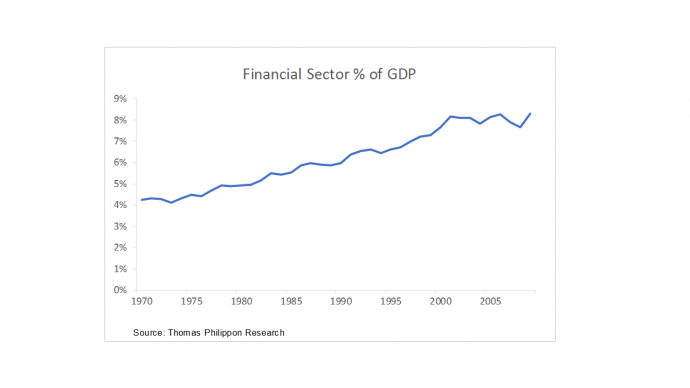 Many of us who earned business degrees about thirty years ago were told something rather startling in Finance 101: capital markets were really all about the management of information.  Stocks, bonds, loans, insurance, were all created to manage the flow of funds between providers of capital and users of capital and to manage risk.  The capital markets, we were told, was where information was processed to make this exchange orderly and efficient.  Speaking at the dawn of the information age, our professors maintained that we were about to experience an explosion of information and the capital markets would never be the same.  This prediction was made prior to the invention of the new-issue high-yield bond (then called the junk bond) and now seems amazingly prophetic.  The growth of the financial economy—financialization—has paralleled the growth of the information economy and this is no accident.  Without an ability to gather and process enormous quantities of information it would be impossible to structure and sell the panoply of new financial instruments cited above, not to mention manage our hedge funds and execute program trading.

If we have the information and can process it masterfully, why aren’t we all better off?  Why aren’t we doing a better job of borrowing from the future to make productive investments today and managing our risks? And why does one small segment of society seem to be benefiting from financialization so much more than the rest of us?  We know that our housing bubble of 2002-2006 represented a colossal misallocation of capital.  We know that we have vastly underfunded our Social Security and Medicare commitments.  We know that we have under-invested in physical infrastructure.  Now, the record isn’t all bad.  We’ve created a venture capital industry that has spurred the growth of our technology and bio-tech companies.  Without high-yield bonds, Ted Tuner could not have created CNN and John Malone would not have built the cable television industry. The creation of REITs helped expand shopping malls across America and leveraged buy-outs have helped revive some moribund companies, such as Hilton Hotels and Macy’s.

We used our new-found information processing skills effectively in many instances, but somehow financialization has grown out of control.  Nassim Taleb, the economist and author, has attempted to address this question.  In his book The Black Swan (2010), Taleb points out how financialization can misrepresent reality and lead to large errors.  In a previous work, Fooled by Randomness: The Hidden Role of Chance in Life and in the Markets (2001), Taleb foretold many of the errors in financialization that were being made at the time—errors which ultimately caused the financial crisis of 2008.  The fact is, our sophisticated financial instruments are constructed and managed through the use of complex financial computer models.  The models are dense, detailed, voluminous—and easily manipulated to produce a desired outcome.  Taleb says our models fail to account for the probability of unexpected and destructive events.  In many cases, however, we load models with a few assumptions that are a little too optimistic—just optimistic enough to provide the result our banks desire and that will make them a lot of money, at least for a while.  A lot of smart people are easily fooled when it is in their financial interests—just ask the former bankers at Lehman Brothers or the analysts at S&P and Moody’s.  Even Jamie Dimon, our smartest banker, was bamboozled by the London Whale.

Is there an answer?  Not an easy one.  That 8.2% of the economy now engaged in financial work is too strong to corral.  Moreover, even our most brilliant economic thinkers, such as Larry Summers, will call you a Luddite if you try to turn back the clock.  But we’re twice burned, and now should be on our guard.  Our money is too important to be turned over to I Robot.